arrived home late last night after driving all day and getting to mildura in time for the opening of geoffrey ricardo's show at the art vault before heading home.


geoffrey's show looks terrific and there are very big dramatically dark etchings that i want to talk to him about, really great technique and powerful images. burnished aquatints i think.


so then it was on to wentworth to get home before 10 pm so i could see if the watering system was in action.   i was keen to see how it  had performed after a week away. it's programmed to come on every night and go through it's 3-hour cycle, watering all the grass and garden around the house.

there was water running way down the drive . . . flooding on the verandah, dry lawns,
a bit of a mess really

Some kind person (i think it was the wonderfully named steele scaddings, the rideon mower man) had decided to come and cut the grass while i was away so all the sprinklers that are on a hose around the perimeter of the lawn had been dragged off to one side next to the house, and left in a stack.  and one hose had popped off the tap and the water was just running straight down the driveway.

the stacked up sprinklers were all on in a great pile near an open window and water had
poured in all over some artwork and cut mattes that were on the studio floor.  luckily
nothing for my coming show.  so i don't know how many days it had been like that but
at least a few.  lots of dry lawn, and small flooded spots.

SIGH!!!  at least the system is working, now to find out who cut the grass and ask them to ring first before they come.

this morning i've woken up to a smoky river, at first i thought it was mist, but it's very blue and i'm thinking that smoke from the fires down south is wafting up this way, after all it's been over a week  now that  the grampians fires have been growing and moving.
I'm pleased to hear from sister helen who lives there that the fires are a long way from their place. 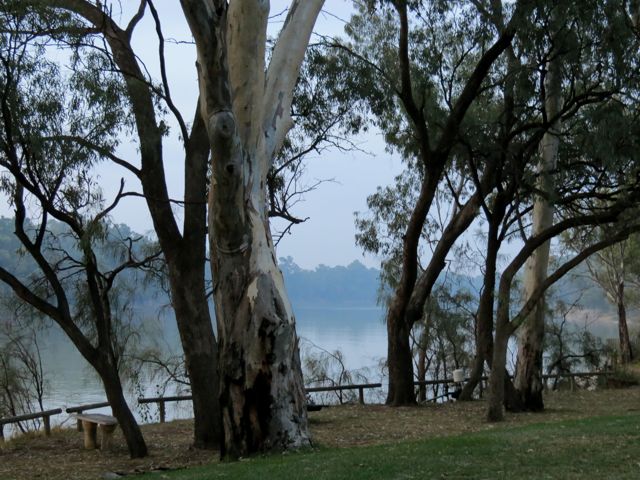 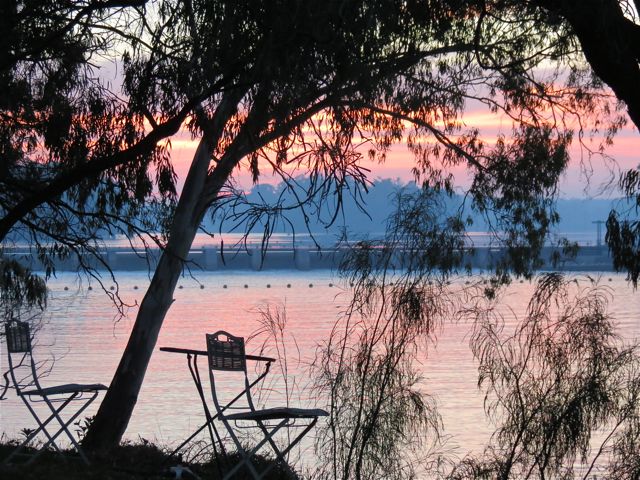